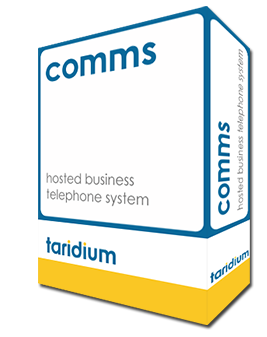 Taridium's comms is a Virtual PBX platform that leverages common Open Source projects such as Linux, Asterisk and PHP. It offers a complete hosted PBX application. It uses a partitioned naming convention that enables multiple PBXs to run on a single server instance without the need for virtualization overhead.

All of comms software components can run on a single server, or can be split up for improved scalability. They are installed as architecture independent RPM packages along with a number of required dependencies. Currently only RedHat Linux and clones such as CentOS are supported.

The comms core component contains shared libraries common to both switch and web packages. This includes the specifications for the database schema. Files for the comms core can be found in /usr/local/comms/. Depending on the size of the installation core packages are installed on switch and web servers, but can also be installed separately. Particular applications for separate installations are configuration database servers and CDR servers.

The following distinct interfaces are available:

The administrator interface controls the general settings of the system. It provides status information, plan, reseller, billing and customer management. It allows you to add new customers/PBXs, called 'enterprises' and configure DID/DDIs, as well as manage the device types, such as phones and other VoIP end points.

The enterprise interface controls the actual customer configuration. It is also known as the Virtual PBX interface. It provides for management of extensions, IVRs, groups, queues, conferencing and much more.

The End User Panel controls individual extensions and their settings. It provides the end user with voicemail access, call logs, call forwarding/follow me and more.

The console gives users the ability to monitor other extensions, place, receive and transfer calls.

The ITSP interface offers a subset of the administrator interface intended for use by customer service representatives and resellers.

The comms configuration is held in a central MySQL database 'comms'. All database elements are edited through either the web interfaces or voice applications. The CDR records are held in a separate 'cdr' database.

Some static configuration elements that apply to both switch, web and proxy packages are configured in config.php (/usr/local/comms/conf/config.php). The default values for these are stored in default.php. A complete list of configuration parameters can be found here: comms Configuration File.